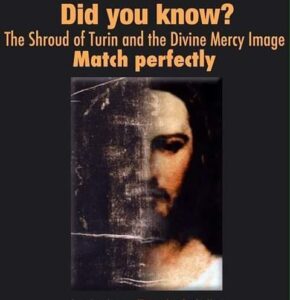 On February 22, 1931, while staying in Plock, Sister Faustina received Jesus’ order to paint a picture according to the vision shown to her (cf. Diary 47). She tried to fulfill the command, but not knowing painting techniques, she was unable to do it by herself. Still, she did not give up the idea. She kept returning to it and sought help from other sisters and from her confessors.

A few years later her superiors sent her to Vilnius (Wilno), where her confessor, Rev. Prof. Michael Sopocko, interested to see what the picture of a hitherto unknown theme would look like, asked the painter Eugene Kazimierowski to paint the picture according to Sister Faustina’s directions. This is the only image that was painted under her direction. Kazimirowski painted the original image between January and June of 1934. During this time St. Faustina had the artist change the face at least 10 times but was still not pleased with it. The picture was finished in June 1934 and hung in the corridor of the Bernardine Sisters’ convent near St. Michael’s Church in Vilnius, where Father Sopocko was rector.

From April 26-28, 1935, during the celebrations concluding the Jubilee Year of the Redemption of the World, the image of The Divine Mercy was transferred to the Ostra Brama [“Eastern Gate” to the city of Vilnius] and placed in a high window so that it could be seen from far away. Here the image was seen for the first time by the public. By permission of Archbishop Romuald Jalbrzykowski, on April 4, 1937, the image was blessed and placed in the St. Michael’s Church in Vilnius.

In 1944, a committee of experts was formed, at the order of Archbishop Jalbrzykowski, to evaluate the image. The experts’ opinion was the the image of The Divine Mercy, painted by E. Kazimierowski was artistically executed and an important contribution to contemporary religious art.

You will notice that the Image resembles the Shroud of Turin very closely. For more on this see the Shroud section.

The original image deteriorated but was restored in 2003. 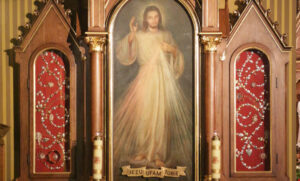 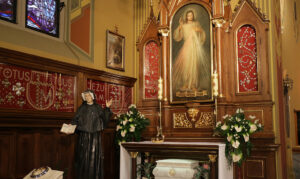 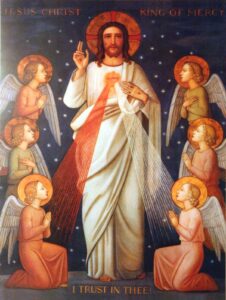 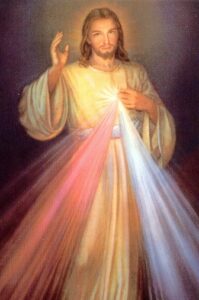 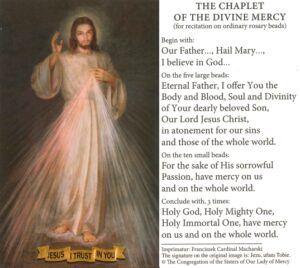