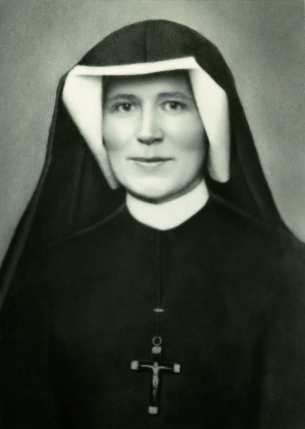 Sister Mary Faustina, an apostle of the Divine Mercy, belongs today to the group of the most popular and well-known saints of the Church. Through her the Lord Jesus communicates to the world the great message of God’s mercy and reveals the pattern of Christian perfection based on trust in God and on the attitude of mercy toward one’s neighbors.

She was born on August 25, 1905 in G»ogowiec in Poland of a poor and religious family of peasants, the third of ten children. She was baptized with the name Helena in the parish Church of Ðwinice Warckie. From a very tender age she stood out because of her love of prayer, work, obedience, and also her sensitivity to the poor. At the age of nine she made her first Holy Communion living this moment very profoundly in her awareness of the presence of the Divine Guest within her soul. She attended school for three years. At the age of sixteen she left home and went to work as a housekeeper in Aleksandrów, ºódï and Ostrówek in order to find the means of supporting herself and of helping her parents.

At the age of seven she had already felt the first stirrings of a religious vocation. After finishing school, she wanted to enter the convent but her parents would not give her permission. Called during a vision of the Suffering Christ, on August 1, 1925 she entered the Congregation of the Sisters of Our Lady of Mercy and took the name Sister Mary Faustina. She lived in the Congregation for thirteen years and lived in several religious houses. She spent time at Kraków, P»ock and Vilnius, where she worked as a cook, gardener and porter.

Externally nothing revealed her rich mystical interior life. She zealously performed her tasks and faithfully observed the rule of religious life. She was recollected and at the same time very natural, serene and full of kindness and disinterested love for her neighbor. Although her life was apparently insignificant, monotonous and dull, she hid within herself an extraordinary union with God.

It is the mystery of the Mercy of God which she contemplated in the word of God as well as in the everyday activities of her life that forms the basis of her spirituality. The process of contemplating and getting to know the mystery of God’s mercy helped develop within Sr. Mary Faustina the attitude of child-like trust in God as well as mercy toward the neighbors. O my Jesus, each of Your saints reflects one of Your virtues; I desire to reflect Your compassionate heart, full of mercy; I want to glorify it. Let Your mercy, O Jesus, be impressed upon my heart and soul like a seal, and this will be my badge in this and the future life (Diary 1242). Sister Faustina was a faithful daughter of the Church which she loved like a Mother and a Mystic Body of Jesus Christ. Conscious of her role in the Church, she cooperated with God’s mercy in the task of saving lost souls. At the specific request of and following the example of the Lord Jesus, she made a sacrifice of her own life for this very goal. In her spiritual life she also distinguished herself with a love of the Eucharist and a deep devotion to the Mother of Mercy.

The years she had spent at the convent were filled with extraordinary gifts, such as: revelations, visions, hidden stigmata, participation in the Passion of the Lord, the gift of bilocation, the reading of human souls, the gift of prophecy, or the rare gift of mystical engagement and marriage. The living relationship with God, the Blessed Mother, the Angels, the Saints, the souls in Purgatory — with the entire supernatural world — was as equally real for her as was the world she perceived with her senses. In spite of being so richly endowed with extraordinary graces, Sr. Mary Faustina knew that they do not in fact constitute sanctity. In her Diary she wrote: Neither graces, nor revelations, nor raptures, nor gifts granted to a soul make it perfect, but rather the intimate union of the soul with God. These gifts are merely ornaments of the soul, but constitute neither its essence nor its perfection. My sanctity and perfection consist in the close union of my will with the will of God (Diary 1107).

The Lord Jesus chose Sr. Mary Faustina as the Apostle and “Secretary” of His Mercy, so that she could tell the world about His great message. In the Old Covenant — He said to her —I sent prophets wielding thunderbolts to My people. Today I am sending you with My mercy to the people of the whole world. I do not want to punish aching mankind, but I desire to heal it, pressing it to My Merciful Heart (Diary 1588).

The mission of Sister Mary Faustina consists in 3 tasks:

– reminding the world of the truth of our faith revealed in the Holy Scripture about the merciful love of God toward every human being.

– The third task in Sr. Mary Faustina’s mission consists in initiating the apostolic movement of the Divine Mercy which undertakes the task of proclaiming and entreating God’s mercy for the world and strives for Christian perfection, following the precepts laid down by the Blessed Sr. Mary Faustina. The precepts in question require the faithful to display an attitude of child-like trust in God which expresses itself in fulfilling His will, as well as in the attitude of mercy toward one’s neighbors. Today, this movement within the Church involves millions of people throughout the world; it comprises religious congregations, lay institutes, religious, brotherhoods, associations, various communities of apostles of the Divine Mercy, as well as individual people who take up the tasks which the Lord Jesus communicated to them through Sr. Mary Faustina.

The mission of the Blessed Sr. Mary Faustina was recorded in her Diary which she kept at the specific request of the Lord Jesus and her confessors. In it, she recorded faithfully all of the Lord Jesus’ wishes and also described the encounters between her soul and Him. Secretary of My most profound mystery — the Lord Jesus said toSr. Faustina — know that your task is to write down everything that I make known to you about My mercy, for the benefit of those who by reading these things will be comforted in their souls and will have the courage to approach Me (Diary 1693). In an extraordinary way, Sr. Mary Faustina’s work sheds light on the mystery of the Divine Mercy. It delights not only the simple and uneducated people, but also scholars who look upon it as an additional source of theo-logical research. The Diary has been translated into many languages, among others, English, German, Italian, Spanish, French, Portuguese, Arabic, Russian, Hungarian, Czech and Slovak.

Sister Mary Faustina, consumed by tuberculosis and by innumerable sufferings which she accepted as a voluntary sacrifice for sinners, died in Krakow at the age of just thirty three on October 5, 1938 with a reputation for spiritual maturity and a mystical union with God. The reputation of the holiness of her life grew as did the cult to the Divine Mercy and the graces she obtained from God through her intercession. In the years 1965-67, the investigative Process into her life and heroic virtues was undertaken in Krakow and in the year 1968, the Beatification Process was initiated in Rome. The latter came to an end in December 1992. On April 18, 1993 our Holy Father John Paul II raised Sister Faustina to the glory of the altars. Sr. Mary Faustina’s remains rest at the Sanctuary of the Divine Mercy in Kraków-ºagiewniki.

From Vatican: Liturgy of the Saints